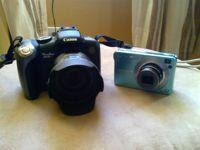 Photography is one of my favorite hobbies. And when you break it down it’s easy to see why. First, I believe that everyone needs, or should have, some sort of artistic creativity; whether it be drawing, paining, writing music, or taking photos. Second, I love gadgets, and there are no shortages of hardware and software gadgets to be used to help me in my quest for artistic creativity. That’s also how I rationalize my photographic gadget purchases.


To quickly summarize the hardware I use, I have a Canon SX10is a point and shoot camera which is about as advanced as you can get without stepping up to a D-SLR .  It’s a little bulky, so I also carry around a Sony DSC-W120 (blue) for those times when I’d rather travel light, or I’m hanging out with friends.  Recently, though, I picked up a Palm Pre smart phone and its 3-megapixel camera isn’t bad for taking shots when the other cameras aren’t around.
But lately I’ve had a need that’s needed scratching, and that was being able to tag my photos with the location of where they were shot. There doesn’t seem to be many reliable ways to make my cameras do this: the Eye-Fi sounds interesting, but from what I can tell it only gets location from wi-fi stations, which is of no use to me if I’m in the middle of nowhere, or not connected to a wi-fi network.  There seem to be devices that I can carry with me that will only track my movements and then use software to tag my photos with GPS coordinates based on the time. That sounded cool, but seems expensive. Then iLife 09 came out.

iLife 09 includes iPhoto 09 which makes use of GPS coordinates and will map them and display them and do all sorts of really neat things with them. And this is great, except I need to feed it GPS info. That’s where the Pre comes in, it geo-tags photos. So now I had a plan: I’d take a set of photos, then before finishing I’d shoot one shot per location with the Pre. I’d import the photos into iPhoto as usual then take the info from the Pre photo and apply it to the rest of the photos from that shoot. So far so good, right?

Now before I laid out $80+ (with tax) for this fine piece of software, which includes a number of other useful pieces of software, I specifically asked Mr. Apple Guy if after a photo is tagged with location information if this information was stored in the file’s EXIF, or in an iPhoto database.  This was important to me because my photo sharing service, Smugmug, can recognize location info and also give my visitors a nice little map of where my shots were taken. Well so far I’ve been unable to get Smugmug to see this information. I’m hoping to figure this out shortly though, as I find it hard to believe that this isn’t possible. It’s quite possible this problem is user error… though unlikely.

Other than my issue with iPhoto, I’m really excited to get my hands on iMovie. When I initially purchased my SX10 I didn’t even look at it’s movie taking specs, I just knew it could. Well it turns out it takes some pretty good movies, even if they’re not HD quality. I’d like to learn how to edit and work with movie files, and from what I understand iMovie 09 is a huge improvement over 08. Look for some attempts at movie making coming soon to the site.

All in all I’m pretty happy with iLife 09, and feel that for now my artistic gadget needs have been satisfied, though the Pentax K2000 (preferably in Storm Trooper white) keeps tempting me.
Apple Canon SX10is photography