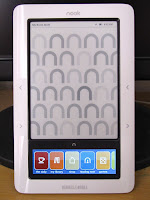 This has been a long time coming, especially since I talked about it for awhile leading up to the iPad reveal. Honestly it took me a while to really get used to it before I felt comfortable giving my 2 cents about it, and I probably wouldn't be so happy about it if I wasn't using a companion piece of software which I'll highlight tomorrow, Calibre. So, do I like my nook? Yes!