The first new iPod to be shown is the new iPod Shuffle. Here are the last couple generations: 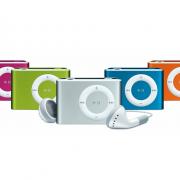 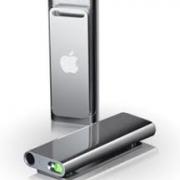 I suppose the second one pictured (technically the 3rd generation) had it's problems, namely not having buttons at all, but I like mine. So how was Apple going to improve? 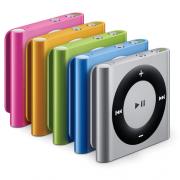 In a sense, they've gone backwards, I think. It's got Voice Over, and blah blah blah but yeah, it's looking like a 2nd generation iPod, just squared up. Personally I like my slab better than these, so I won't be looking to downgrade, uh I mean "upgrade".
Next up, the iPod Nano. The Nano used to be their most important iPod product; it hit the right price point/features. My first iPod was an iPod Mini, the precursor to the Nano. The "old' model had some neat features, aside from music playing; video playback, and video recording and the all too familiar iPod click wheel. Well, here's the 2010 Nano: 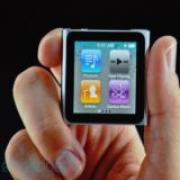 If you said, "It looks like a slightly bigger, touch screen enabled iPod Shuffle" I'd accuse you of reading my mind. And by slightly bigger, we're talking less than .3 inches. So, we lost the clip wheel, but in a surprise we also loss the video play and video recording features. We gain a touch screen, that you can rotate yourself. Thanks? I'm not sure if this is a step forward, but one things's for sure; Apple doesn't like buttons, and is anorexic.
The last iPod to see a refresh is the iPod touch. I'm not including a picture because if you're familiar with the current model then you're familiar with the new one. The main difference? The awesome display from the iPhone 4 is onboard as is the main chip. This promises to be faster, and look better doing it. They also added 2 cameras, a front facing one and one on the back. Apparently the one in back can record in HD, but the picture taking ability is supposedly sub-par. The front facing camera isn't anything, except to be used for the Face Time video conferencing .
Apple iPods