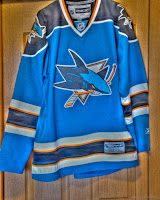 I literally had to dust the cobwebs off this site to get this post up. OK, maybe not literally, but it's been a while. I've decided that blogging on a regular basis isn't something I could do, unless I had a topic. If I didn't think it would completely bore people I could probably write at least weekly about photography, techy stuff (as if there weren't enough blogs on that), or the San Jose Sharks. But even then there are only so many times I could talk about my current fixation on HDR photography, how I can't wait for a new Palm phone and webOS 2.0, or how excited I am for Sharks hockey to return tomorrow (10/8/2010). So what have I been up to? Honestly nothing much. Going through photos and taking more pictures. Biking some, and reading lots. Have I mentioned I love my nook? But, I have to admit, what brought me back is the 2010/2011 NHL season officially starts today!


During the months of October through May/June (hopefully) I bleed teal. The San Jose Sharks are celebrating 20 (!) years of hockey in the Bay Area. 20 years. That makes me, uh, 13 when they entered the league. I'll admit, I wasn't big in hockey at 13, but that quickly changed. My brother gave my sister and I Starter brand Sharks jackets. Now, if you grew up in the late '80's/early '90's you know how cool that was. Then came the hockey trading cards. I dabbled a little in baseball cards, since that's what everyone else did, but my heart wasn't really in it. Hockey cards were way cooler, and not just because of the ice. But I was introduced to hockey long before San Jose got a team. My dad would sit me down in front of the TV when ESPN had nothing else to show but a hockey game and explain wrist shots, slap shots, icing, and share stories of when he played. It was hard to relate to; there were hockey leagues in the area at the time, but they were so small and so unheard of it couldn't compete with little league baseball, or AYSO soccer. But, when the Sharks finally landed I felt I had a leg up on the rest of the fan base, at least those my age, as I knew the game.

Over the years, as any Sharks fan knows, I've witnessed years of horrible hockey, and great hockey. I've seen the playoffs more often then not, and have watched us choke in the pressure games. Will this year be any different? Hard to say with the loss of some pretty important names, and the addition of others, but that's what's great about the start of a new season; a blank slate. With a new captain, and the core offensive players still in tact things look good. So, tomorrow I break out the Sharks jersey, and at 12pm the puck will drop (in Sweden!) and I'll be unavailable for two and a half hours! Go Sharks!

(And yes, the pictures was taken with my Canon SX10is, and is an HDR photo, so I have my 3 favorites in 1 post and 1 picture. Awesome)
Canon SX10is HDR photography SJSharks tech