February 10, 2011
I came across  this MacWorld article about HDR time-lapse photography (or is that videography?) the other day, which inspired me to give time-lapse another go. I wanted to capture sunset to sunrise, ideally, so I could catch the motion of stars. I know it's the rotation of the Earth, but it sure doesn't look like that in the video. Anyway, I happen to live in an area which gets pretty dark and I have no problem seeing stars at night, so I figured it would work out. Well the first try I scouted out a spot on the top of a shed in the back yard to put the tripod and camera on, climbed up using the ladder, and even fashioned a Zip-Lock bag to keep the camera free from moisture. It wasn't going to rain, but we often get fog so just wanted to be safe. So using the excellent CHDK Canon hack I set my camera up, hit the shutter button and climb back down. I figured I'd be replacing batteries about every 4 hours to be safe, so it wasn't until about 9:00 when I realized I hadn't hit the shutter. First night fail. Last night was try #2. It didn't quite come out the way I had hoped, but this time it wasn't stupid user error. In order to get the stars to actually show I'll need to adjust shutter speed; long enough to get the stars but short enough to not get the star trails. I'll try again, but probably not tonight. I wonder if I can program a script in CHDK to automatically change aperture and shutter values while it's continually shooting. That's something to look into.

Anyway, since last night was a bust I decided to sit in on a Topaz Labs webinar. And afterwards, feeling only slightly more educated in how to use it, I thought I'd work a bit on a photo that was showing up on my desktop lately. The shot started off as a 3 shot HDR of the Halfmoon Bay coast line, and was one of my first attempts at HDR. It's handheld, which is usually a no-no for HDR. I'm pretty happy with the feel of the photo, but I don't like what I think is noise in the middle brighter white cloud. I tried using Aperture, Topaz's own DeNoise, and another de-noisifier that I've got in Photoshop Elements to no avail. Think it might just be an issue with shooting JPG instead of RAW. But still, I like it. 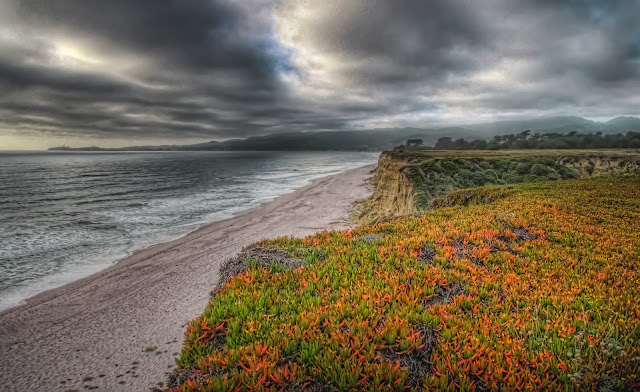