April 26, 2010
The idea started off (in my mind at least) as having lunch with some friends in San Francisco, with a predictable stop at the Apple store. Then we added trying to zipline across Justin Herman Square. Then it became an all day event. And what an event it was! In a nutshell, here is the list of events, from Yelp Elitist Ted:

10:20 am. Out the Door steamed pork bun ($3, today's special, not bad).10:30 am. Blue Bottle Affogato ($5.50, espresso poured over Humphry Slocombe maple walnut ice cream...yummy but there should be more ice cream to offset the bitter bitter coffee).
11:30 am. Rotunda Restaurant @ Neiman Marcus popover with strawberry butter ($2 each, good but not compelling).
12:00 pm. Burmese Kitchen -- tea leaf salad ($5.95 -- good and subtle flavors), crispy fried peas salad ($5.95 -- also good, but be careful not to chip a tooth on some of the seeds / fried peas), fish with tamarmind sauce ($6.50 -- discovered that I'm not a huge fan of tamarind...also a bit spicy).
2:00 pm. Magnolia Gastropub and Brewery Weather Report Wheat Beer ($6, nice light beer -- the only kind of beer that I tolerate).
3:30 pm. Creme Brulee Cart ($4 each, lemon honey and coffee...to be honest, these tasted like creme brulee that I could make).
4:00 pm. La Copa Loca Gelato -- passion fruit and blood orange (passion fruit was good, blood orange was too sweet -- I think a double scoop was like $3.80?).
4:45 pm. Mitchell's Ice Cream ($1.80 for a junior scoop, $2.80 for a single scoop -- do NOT have the langka - jackfruit flavor...but buko - baby coconut - was great).
6:00 pm. Delfina Pizzeria -- Vitello "Tonino" ($10, salad with chilled Pozzi Farms Veal Breast, dandelion greens, tuna bottarga -- this basically looked like weeds with thin slices of veal), Pizza Margherita ($12.50, not bad, standard Italian pizza), Pizza Salsiccia ($15, with fennel sausage, tomato, bell peppers, onions, mozzarella). 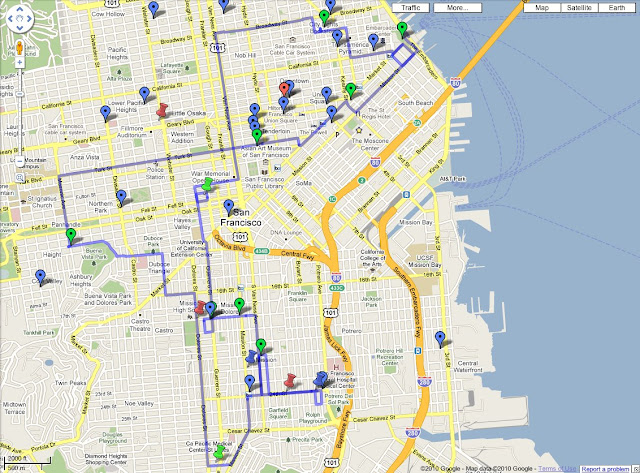 The day actually started off an hour earlier as we tried to get inline for the zip-line action. Turns out we needed to be there much earlier. Apparently people were lining up at 3:30am! I wanted to go, but not that bad. Then it was off to the Ferry Building for the first 2. I had forgotten that the ice cream started right at the beginning, and became an underlying theme for our eating.
A quick car ride took us to the Apple store to check out the iPad. I'm not going to lie, it's very slick looking, and there's something about going in an Apple Store that loosens the wallet. I swear it's some subtle mind suggestion thing. Thankfully we left before I could make any damage to the wallet, and headed to Nieman Marcus, followed by a quick drive out to Burmese Kitchen.
I can't says I've had Burmese before, but this was quite good. I enjoyed the tea leaf salad and the fish. In case you've not figured it out the three of us shared portions; there's no way we could have had full portions for ourselves, but we were getting concerned with our waistlines at this point. Now I love Google Maps on my Prē, but, amazingly enough, distances just don't look so bad when looking at it on a 2x3 inch screen. So we ditched the car thinking our next stop (a bar) wasn't too far. 3 miles later, with a couple side stops we got to our destination
The beer was good at Magnolia. I had a darker amber, while Ted and Amy had the wheat. The weather was nice; high 60's and not a cloud so after our walk (keep in mind this is SF, so hills were involved) the beer tasted great. It also allowed for us, like tech geeks we were, to pull up Yelp on our phones and ipod touch, to check out how to get to the next spot on the list.
Apparently the next spot is mobile. As I understand it, the cart owner Tweets his location for the day, and people go out of their way to sample his crème brûlée. I have to admit I was skeptical about crème brûlée from a cart, but it was quite good. From his current location it was off to gelato. I can't remember what I got (probably chocolate) but it was pretty good. Then it was off to Mitchell's.
When I saw the line coming out the door for Mitchell's I was thinking we'd skip it. I mean it's only ice cream, right? No, apparently it is worth waiting for, even if it was a half hour wait. I think I picked the wrong flavor to wait a half hour for (chocolate-orange), but the others liked the coconut. Next time I'll get something else. I should have listened to Ted and gotten a taste of it first. While at Mitchell's Ted's roommate called up and said he'd join us. Now, by this it's 4:30ish, and we're quite a ways from the car, so when I heard Charlie was driving by I was hoping he'd give us a ride back to the car.
Needing some salt to counter the back to back to back sweetness, we had dinner at Delfina, where Amy's Vancouver friend met up with us. The pizza was a welcome change of pace, and it was great to catch up with Charlie, and meet Jo, a Vancouver Canucks fan (but I don't hold that against her). Skipping Bi-Rite ice cream, due to a long line, Charlie was nice enough to take us back to the car where we went our separate ways.
My feet definitely were hurting after all this, and I was certainly full, but my jeans still fit so the walking paid off. All in all a good start to a good week.
Food SF