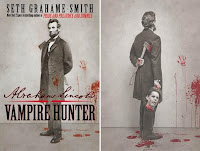 In case you haven't been keeping up with the media scene, vampires (and werewolves) are a dime a dozen these days. And having not watched a single vampire show or teenage angst movie, I was afraid Abraham Lincoln: Vampire Hunter was going to be somewhat similar. A teenage Abe, shirtless, built like a Greek god, hunting vampires, and falling in love with one. Now I'll be the first to admit that my knowledge of Abe prior to his time serving as President is limited to the picture of a kid (possibly in a stove top hat) reading by candle light in a log cabin. What happened between then and him becoming President (with the exception of some time spent debating Stephen Douglas) are a mystery to me. This book fills those gaps with, what I hope, is a little mixture of fact and fiction.
I won't give too much away, but Abe's mother died at the hands (teeth?) of a vampire, and from that moment he vows to rid America of all vampires. It seems that America is the new place for the European vampire to come and continue their bloody ways, and to influence the growth of the country. Abe, with the aid of a friendly vampire, begins to hunt. What started off as a personal vendetta soon becomes a political and national problem. No, not a vampire uprising directly, but it seems vampires are the biggest backers of the slave trade, as it keeps them with fresh supplies of blood. I had been wondering how the author was going to handle Abe's Presidency and the Civil War, but clearly wasn't expecting this.
The book is sometimes funny (Edgar Allan Poe is mistaken as a vampire), but is well written and, once the story got moving, engrossing. I will say that the ending wasn't really satisfying, and I'll leave it at that so as to not spoil it for anyone. So, if you have time for a quick read I highly recommend Abraham Lincoln: Vampire Hunter. I don't think it will disappoint.
e-books reading review