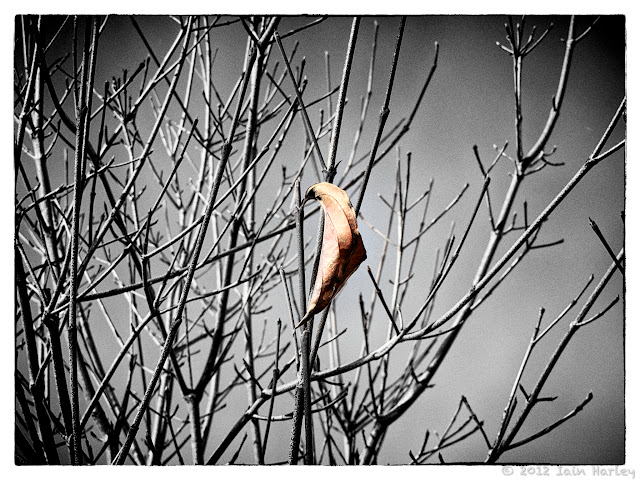 Last week's theme for the Google+ 52 project was Winter/Summer, depending on what side of the equator you're situated on. Winter in California has been difficult to photograph as there is no snow, and temps have been in the 60's with sunny cloudless skies. Initially I had hoped to capture an early morning frost that had been fairly common over the last month, but of course this last week there was none. I had captured some water droplets on an evergreen tree, that might make it to Thursday's post, but that didn't convey winter to me. I was getting worried by Wednesday when I had no potential shots, and even worse, no ideas.
So I stumbled across this shot, a nearly leafless tree with a cold looking sky as it's backdrop. And when I framed it I immediately knew I was going to make this a black and white and bring the color back to the leaf. Not much work was needed to be done in Aperture to prepare the photo for Silver Effex Pro, so it was a relatively simple Silver Effex conversion and selective color setup. Sadly the leaf was pretty flat color wise, and any attempt on my part to boost it's saturation and colors just made it look too fake.


You can view this, and the rest of my Project 52 photos here.
2012PROJECT52 black and white Canon SX10is photography