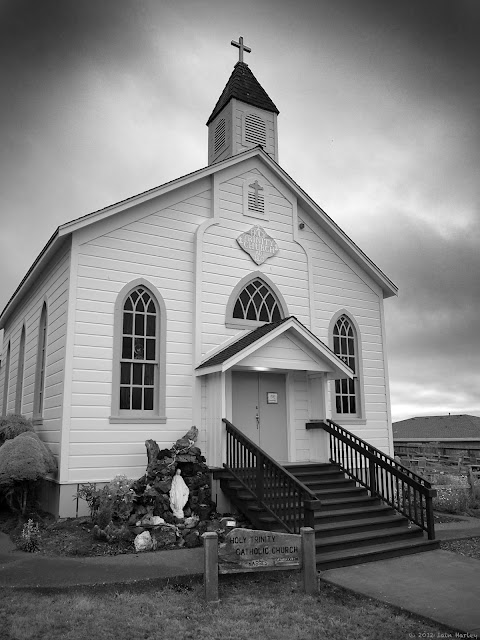 With only three Thursdays left in 2012 it's time for part three of my five favorite photos taken by me in 2012. These aren't the blog's most popular photos (which you can see on the right side), but are the photos that I enjoyed taking, working on, and looking at the most. The order picked is random, so today's shot is not the least-favorite or the most favorite shot of 2012.

OK, so I'm late posting this, and I'm not even adding a book to the post this week. I've also not been shooting for the last couple weeks because I've been without a camera and eagerly awaiting a new one. Well the new one arrived Wednesday so I was a little pre-occupied to getting this post off. And I'm purposely leaving out a book review because I'm lazy.

This was shot for my Project 52 challenge. Of those shots very few of them made it into my "like" column due to various reasons. The theme for this shot was black & white and I enjoyed finding the church and taking only 3 photos (from different angles) and going with this one. I was really happy with how the whole thing turned out, from the clouds to the church and the surrounding details. As with all my black and white conversion, this started off life as a full color shot which I then took into Silver Efex Pro to tweak the process up some.
2012PROJECT52 black and white Fave 5 2012 Panasonic GF2 photography