November 20, 2015
It's been a while since I've put anything up here, but I haven't been neglecting photography. If you follow me on Instagram, Twitter, or my favorite mobile sharing/editing tool VSCO Cam you'll see I've been shooting and editing lately more often with my Moto X and the VSCO Cam mobile app. But there's been some interesting news lately in the photo world that had me interested enough to actually do a post.

+Trey Ratcliff and +Macphun have just released a new HDR program caller Aurora HDR. I've played with a lot of different HDR programs before happily choosing Photomatix Pro, also the program Trey was recommending back when I was first starting off in photography. I've been tempted by others (NIK HDR Efex Pro 2 has come the closest to making me switch) but in the end I come back to Photomatix. Maybe it's familiarity, or maybe it's just that I know and like the program and can get it to do what I want it to do quickly. I even tried out Lightroom's HDR option. So the plan was to download the trial piece of Aurora HDR and feed it, Photomatix, HDR Efex Pro 2, and Lightroom the same set of brackets and try to see how close I can get to the finished idea I had in my head in each of them. The idea sounds good, but I probably should have read the fine print for Aurora's limitations during it's trial period; I can't save photos. So now what? I have three HDR'd photos sitting in Lightroom, so let's look at those.

Here's the 0 exposure. This shot was metered directly at the nose of the B-25, which is why the items inside the plane are well exposed, but the clouds are blown out. 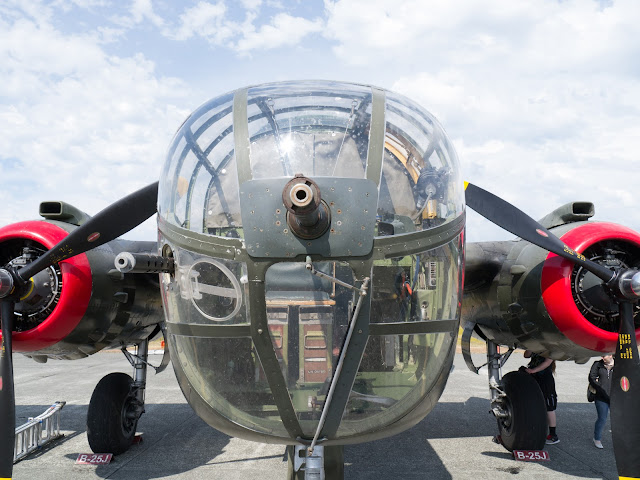 First up, Lightroom:
You might have to look at this large, but this his horrible. Chromatic aberrations? All over the place, just like at the wheels. Blacks aren't so black. There's very little contrast. My idea for this shot was to go a little grungy with deep blacks. This is as far from that as possible. Lightroom doesn't offer any presets like NIK or Photomatix, but does offer deghosting options (helpful for the people by the landing gear on the right of the photo) and auto aligning (great for handheld shots) and auto toning, which is pretty hit or miss. The end result is not a whole lot of flexibility before importing the photo back to the Lightroom library.

Next up, NIK HDR Efex:
NIK does a really good job. In fact when it came up I thought I had a winner. Keep in mind this isn't perfect, or meant to be, but this has the overall look I'm going for with a preset. The sky isn't great, the sky is a little over saturated and the clouds are a little too grungy, but it's a good starting point. I wasn't crazy about the glass, I feel there's a yellow-ish tint to it, and the blacks are too black, but this is the look I was going for. NIK features de-ghosting, auto alignment, and chromatic aberration reduction.

Finally, Photomatix
Photomatix has what I was looking for; detail inside the engine bays, but still dark. You can see the tread in the wheels, and the glass seems cleaner. The sky is still muddy, which is an HDR issue in general, but it's not super saturated like NIK's. For me this is a great starting point for this shot. Again, this is a preset with no playing with the sliders. Photomatix allows for auto-aligning, de-ghosting, noise reduction and chromatic aberration reduction. And that's before getting into the toning options.

So how would I finish the shot? Something like this, I think:
A quick run through my workflow here; DeNoise the image with Topaz DeNoise. Normally I would consider denoising the bracket shots before HDRing, but that is time consuming, and I find that I only do this with shots that I think have potential to be exemplary. Then I went to work with contrast and saturation with Topaz Clarity to darken the shadows a little and really give the photo some pop. For this type of photo Clarity is by far my favorite plugin to use. Lots of control over just what I want to impact, and it does a good job of keeping things looking clean. Then a light detail enhancement.