Stepping it up with the Hamilton Khaki Field Automatic. Late in 2019 I had the opportunity to pick watch number 8 up used off a watch forum. This was to be the watch that takes the collection to the next level in terms of craftsmanship and quality. Well when I got it I wasn't that impressed. At first. But then I began wearing it more often and I could see why. It's all the little things. The watch keeps impeccable time for an automatic, the simple dial is perfectly executed, and the red tipped seconds hand is a fun touch. The bracelet is probably a little more comfortable wear than the already excellent bracelet from my earlier Citizen, and it has the magic words "Swiss Made" at the bottom. It quickly won me over and made making the last watch in the collection an easier thing to do. This would be half of the duo of watches that would end up taking the place of my beloved Seiko SNK805. 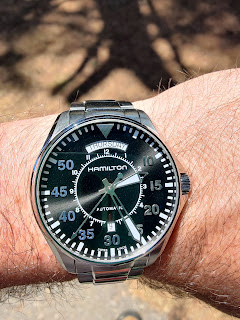 The current crown jewel of the collection, the Hamilton Khaki Pilot Day Date automatic. This watch caught my eye (and my heart) over 4 years ago. Based on a B-Type flieger dial design (minutes accentuated over hours) it adds a really nicely executed day and date function at the 12 o'clock and 6 o'clock areas of the dial respectively. For me, a watch needs to have at least the date on it to be considered for daily wear. My watches need to be functional on top of aesthetics. But the thing that really drew me into this watch are the minute indices. They're metallic and grooved in such a way that they really play with the light; either coming off as illuminated and brighter than anything else on the watch or a flat look to them. I find myself playing with light angles often with this watch. Oh, and it was featured in the movie Interstellar (along with another Hamilton watch) and worn by Cooper, Matthew McConaughey's character. This has rarely left the wrist in the week I've had it so far and I don't see it going anywhere anytime.
So, what does 2020 have left for me and watch collecting? I have two watches I hope to pick up over the course of the rest of this year. One will be the Hamilton watch that I picked up the Citizen Flieger for, though I think that will be a Christmas purchase. The other watch, which I'm tentatively planning for an end of summer pick up is a titanium dive watch, to be revealed once it's picked up.
watches