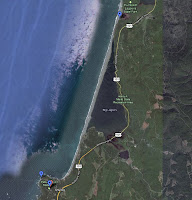 After what was a busy couple weeks with family stuff, I got some time to enjoy. Took along my SX10 is for some fun outdoors on the North Coast.


Apparently there are lagoons in Humboldt, with a coinciding state park, Humboldt Lagoons. A lagoon is "an area of shallow water separated from the sea by low sandy dunes" (dictionary.com). I didn't actually spend any time along the lagoons themselves but on the coast. One of my desires in photography is to catch a wave breaking on rocks. It sounds easier than what I have pictured in my head, but I think I got some good shots, though maybe not the one. I took over 100 shots, so if you do go view the gallery you'll see a lot of what look to be the same shots. Since I was committing a supposed cardinal sin in taking photos outside in the middle of the day with a bright sun, I found shooting in black and white to be a better option. I understand that it's preferable to shoot in color then transform to B&W in post processing, but I a) don't have the skills to really fine tune the transformation and b) am too lazy. Ideally if I could setup the camera to take 2 shots (1 color, 1 B&W) automatically that'd work out better. It was also a good day to break out the circular polarizer I'd picked up sometime back. Using the histogram I was able to rotate the polarizer to get less overexposure of certain areas. It also is supposed to give more pleasing blue skies and cut down on glare of shiny objects, like water. Overall this was a much better outing with it than in the past. I did find though when stacked on top of my UV filter there was slight vignetting in the corners.

Overall I was really pleased with the shots, with the B&W being my favorites. Click here if you want to see the rest of the gallery. Here's a short B&W clip:

The next stop was to a State Park I'd heard about but hadn't explored previously, Patrick's Point. It looks to be a fun park to explore, and one I'll have to do again when I have more time. There was an Indian village, which sounds cooler than it ended up being. The handful of huts, central gathering area, and sweat hut were neat to look at, but I kept thinking they could have had more on display. Though, we weren't in that area for long, so it's possible that there was more to be seen, I just didn't see it. At this point my travelling companion was running out of steam so we made a quick trip to Wedding Rock, which is just a part of the coast that stick out into the ocean a little more than the neighboring coastline. I'm told it's a good whale watching spot, which I'll keep in mind for when whale watching season comes up. There looked to be a lot of good trails for hiking (no bikes

) that I hope to explore in future visits. The below video is the hike up the rock. There are some good views of the coast from here, and it was quite windy. Click here for the gallery.


And some of my favorite shots from both spots: