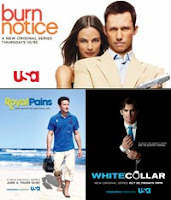 It's mid-July now, and not TV's best time of year. The main channels are sporting re-runs (at best) or shows that (I think) are marginally good at best. There are only so many "America's Got Talent/Dance Moves/Jokes" I can take. So I thought I'd take refuge in watching re-runs of House, and NCIS on USA. I have to admit, I thought the USA channel was primarily for watching re-runs of either currently showing, or recently aired shows. It's how I caught up on House, after finding it in Season 3. But then I actually saw some commercials... Did you know they have their own shows? And I think they're pretty good. Granted, they don't have much in the way of competition, but I think some of them might just do well if they were to air during fall or winter. The ones I've seen certainly fit the station's tag line, "Characters wanted". They are character driven shows that are all a bit off, which makes for fun TV. They aren't flat out comedies, and they're not LOST style dramas. They're just fun, what TV should be on a summer evening.

White Collar was the first one I discovered, which first aired late last year/early this year. The main characters are Neal, an ex-con who specialized (specializes?) in white collar crimes; forgeries, bonds, cons, and Peter the FBI agent who caught him... twice. Neal is to spend the rest of his 4 year sentence as a "consultant" to Peter in solving high profile white collar crimes. The show works because the two actors really play well off each other; the slick and stylish Neal partnered with the down to earth meat and potatoes Peter. There's an over-arching storyline involving Neal's girl friend, crooked FBI agents, and a music box that gets shown with a weekly case. The nice thing about this show is that it doesn't portray either one of them as smarter than the other, so there's no bumbling agent and genius ex-con. They both solve the cases. And it was good to watch their relationship build to a friendship. This is by far my favorite of the USA shows, if not one of my favorites regardless of the channel.
Royal Pains is another show in its sophomore season. The premise is simple; take a good caring doctor, get him fired for being a good caring doctor, then transplant him to the super rich community of the Hamptons where he makes house calls to the rich, and the not so rich. Throw in a mysterious benefactor with a mysterious genetic disease, a goofy brother, daddy issues, a physician's assistant dying to get out from under her parents plans, and a hospital administrator as a love interest, and you have the makings of a quirky medical show. Actually after having written all that out it seems like a lot to pack into a 1 hour show, and judging by the fact that not all of them are tackled in every episode it might be hard to jump right in with Hank. I have to admit, Hank's brother Evan can be a little... annoying to watch, though this season has been better for him. The show is fun, if a little outlandish, but it is the Hamptons, which I think must be like saying, "it's Hollywood" for us on the West Coast.
Burn Notice is kind of on the bubble for me, yet I'll include it here because, again, it's fun. What do out of work spies do? Well, you'd be surprised. Health clinic being threatened by drug dealers? Michael Westin and company will help you out when the police can't or won't. Mafia shaking you down? Again, Westin and crew to the rescue. It's kind of reminiscent of the A-Team back in the day, just without the hip van, and BA (Mr. T.). Michael gets a burn notice, meaning he's no longer an operative for the CIA, and he's basically stuck with what ever he has where ever he is, which happens to be Miami. Which also happens to be where his mother lives, and an ex-girlfriend lives. I either missed the episode that explains why his ex (Fiona) is an expert marksman, but it wouldn't surprise me if she was also an ex-operative, because Michael is always running into ex or currently running operatives. Miami is like the new London for spies, I guess. There are some bigger plots at play here, like why was Michael burned, and a general desire to stop really big bad guys, as opposed to the little ones he and his crew are hired to stop every week. The show is unique because Michael will also narrate what a spy does, and how. It's very dry humor, but I find it funny, and again, fun. Plus, there's a lot of action and explosions.
A couple other shows have caught my eye; Psych features a detective agency of 2, 1 of which pretends to be a psychic. They generally stumble through a case and end up solving it, while looking like they're smarter than they actually are. Amusing, but hasn't quite made it to my "gotta see" list. The other one is USA's new Covert Affairs which is brought to us by the guy who brought us the good Jason Bourne spy movies. It's only episode 2 for them, but it's a little difficult to figure out. Is it trying to be a hard core spy show, or just a kind of spy show? I think part of my problem is two fold: The main actress is the girl from "Coyote Ugly" (Piper Perabo) and she just looks too good girl to be a spy. The other issue is that the guy who played Dr. Suresh from Heroes (yes, I was one of the 10 people who was still watching Heroes) is in it, and I keep waiting for him to morph into some mutant super human, with anger issues, that spins webs, I like the blind guy, who seems to be the Q to James Bonds, but not sure why they had to make him blind. We'll see if I keep up with Annie and her CIA career in the coming weeks.
So what do you watch during the summer, while waiting for your favorite show(s) to come back?
TV