Photography What Not (Photocentric)

May 15, 2011
One of problems I have is seeing my own photos. Sure, I can open up Aperture and flick through them, but I want to see them without having to fire up Aperture, or some other light weight photo viewer. I could print up photos, but that gets expensive and wasteful after awhile. I wish LCD photo frames were of high quality, as I think that would work. 1 think I've been doing is changing the backgrounds of my displays. It's nice in OS X to select an Aperture Project and have it change randomly. Another nice thing for those of us who spend all day in Gmail is the ability to customize a theme. This is also available in the Labs section of Google Calendar. It's nice to open GMail and see something of mine, or anything else you want to see. Have a look at my current GMail space with a current favorite HDR shot of mine: 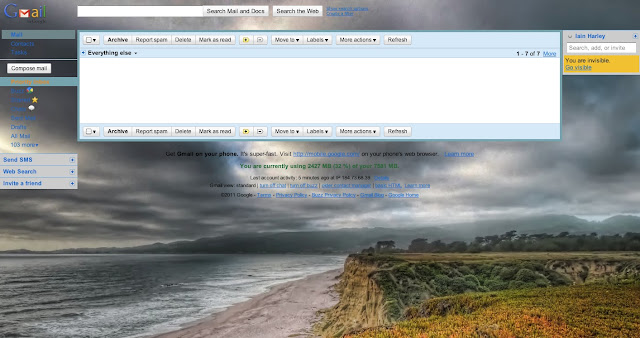 Late last week Topaz Labs released a new plugin called Lens Effect. Basically it can mimic the effects of certain lenses (fish eye, tilt-shift) and bokeh. It's a pretty neat plugin, and I've been trying the free demo now for the last couple days. I gotta say it's a lot of fun to just play around and see what you can come up with.

The first set are attempts at a tilt-shift miniaturize effect that's kind of big right now. I don't think they turned out quite as well as they would if I were in a high position, looking down on the city, but it's not bad.

As you can see the Palace of Fine Arts is in the focused area with the foreground and background blurred which, I believe (I'm still figuring this stuff out) is supposed to give the illusion of the rest of the city being toy-like. I've seen much better examples of this, but this is probably the best shot I currently have to try and take advantage of this. There's also a two-tone filter in effect here that has the top of the city and sky cooler, and the rest of the image warmer.

The next group are my experiment with bokeh. All in all, not bad. Bokeh originates from  Japanese, and means "the visual quality of the out-of-focus areas of a photographic image, especially as rendered by a particular lens." The best lenses for bokeh are usually very fast and very expensive, so this is a poor man's way to apply bokeh to shots.
This was a quick bokeh effect, and is useful in dimming or blurring other parts of a shot that could be distracting, or to bring the viewers eye to a something specific.

Lens Effects is available as a plugin for Apple's Aperture and iPhoto, and Adobe's Photoshop and Lightroom. Like I mentioned, they have a free 30 day on all their great products, so give them a shot.
Canon SX10is Lens Effects photography Topaz Labs