Amazon is on Fire 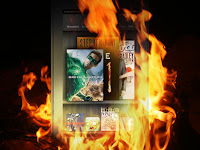 Amazon is finding itself in the spotlight recently and for good reason. Their new Kinde e-readers look great, and more importantly have a starting price of under $99! They also, thank goodness, got rid of that horrible looking keyboard. With different models offering different features it's hard to find a reason not to buy one. The entry evel model has a buttton interface for page turning, wifi connectivity, and shows well designed ads on the home screen and as screen savers. The top of the line e-ink e-reader features an infrared touchscreen (like the latest from Barnes & Noble) and adds 3G cellular connectivity for buying books from Amazon. At these prices I'm having a hard time seeing how Barnes & Noble can compete. Their entry level Nook is $139. The only other thing I used to be able to cite as a big selling point for Nooks were their ability to check out e-books from libraries, but earlier last month Amazon announced their file format was now avaiable in libraries. So why wouldn't you get a Kinde? The only reason I can come up with is if you are already invested in B&N books that won't be accessible on Kindle. But these were just the appetizers to Amazon main dish, a tablet.

The Kindle Fire is a 7 inch Android run tablet. The hardware specs aren’t exactly mind blowing; no 3G, no cameras, small storage space, middle of the road speed. It runs some flavor of Google's Android but it's been heavily altered, some would say improved, and it has deep tie-ins with Amazon's services. Specs wise it is no iPad killer, but it's the integration of Amazon's services that make it a possible iTunes killer. Fires come with a 1 month free trial of Amazon Prime. I wasn't entirely knowledgeable about Prime. I thought it just got you free 2 day shipping. Turns out it gets you a bunch of streaming tv and movie  content, unlimited space in their MP3 storage locker, and the 2 day shipping all for  $80. That's less than $7 month. Did you hear that Netflix? Add in their large e-book store, their well priced mp3 store, their new and growing Android App store, and what look to be more popular magazines and periodicls and you have a very media centered device with lots of choices. Oh and did I mention the price? $199. Possibly the first sub $200 tablet that will be worth it. I'm not counting the HP TouchPad as it is both discontinued and only being made available at $99/$150 so they could quickly get rid of them.

It remains to be seen just how good a tablet this wil be, but I have no reason to think it won't be at least decent to use. It is obviously aimed at media consumption and should handle web tasks fairly well, but make no mistake, in terms of versatility this is not an iPad killer. What it is is a Barnes & Noble Nook Color killer, though to be fair B&N is expected to announce a new Nook Color shortly and it remains to be seen if B&N can compete on price (the current Nook Color retails for $249), because it can't offer all the other media service Amazon can. Besides B&N, Google should also be worried about this. Though the Fire runs Anroid, it is heavily customized and doesn't access Google App Market, lending more fuel to the argument that Android is too fractured for consumers to get in on. Apple should also take note of this, not for the hardware, but for the media integration. iTunes may have won the music wars but the video wars are still taking place.

Amazon also found itself in the middle of a rumor, that at first I ignored because it made no sense to me, but as more and more serious tech blogs reported it I began wondering about it. As most are aware HP has all but given up on webOS and is looking to get the most return it can get for it. Well Amazon might be talking to HP about taking webOS off their hnds. I'm not sure I see a reason for Amazon to do this as it would basically be starting over if they use webOS on their future tablets. The argument being made is this would make it so Amazon didn't have to face the wrath of Microoft in paying licensing fees for Android. Or they could simply want the patents that came with Palm. It will be interesting to see if this comes to fruition or not. One thing's for sure, though, Amazon is on the move.
Amazon e-books ereader HP tech webos