(Note: I originally wrote this prior to Apple's WWDC event held yesterday with their iCloud announcement. I've got my thoughts on that and will write something up shortly)
Amazon, and most recently Google, have recently unveiled new services that allow for their users to upload their music to their respective servers and have access to their music from any internet, Flash enabled device around. These systems, caller lockers because they passively hold your music that you upload, are both cool and annoying. The cool thing is having an easy to use reliable service to stream your music to multiple devices. Anyone with a portable device these days knows that storage space can be pretty slim, so this is a welcome way to not have to pick and choose between your work files or your Lady Gaga collection. The annoying thing is you have to upload all your tracks. For me, with over 6,400 songs at 45 gigs this could take a while.
The other big deal about these services is they both don't have the blessings of the music industry giants. Which is probably why with the Google service there isn't a store attached to the service and with Amazon there isn't as much store integration as you'd think. Your purchases from their store can land in your Cloud Drive, but you can't find a link to check out other albums of an artist you have in the Cloud Drive. So why did these two big companies go forward then if the music industry isn't behind it? Because something is better than nothing, and Apple is about to show them both how it's done next week when it shows off its iCloud service, rumored.

I've been using Amazon Cloud Drive since it came out. OK, that's a bit of a stretch. I've had some stuff put up there for a while but haven't really made use of it. With 5gigs of storage free off the bat, that's kind of nice, but not the answer to my library needs. Thankfully Amazon has pricing plans if you're in need of more space. To fit my library I'd need to upgrade to a 50 gig plan at $50 a year. Not horrible pricing by any means. Purchases made from the Amazon music store automatically upgrade your account to 20 gigs of space. I took advantage of an album on sale for $.99 and got it and 15 more gigs of space. Pretty cool deal. Unfortunately subsequent purchases didn't further upgrade my space, but that's just being nit picky. The other cool thing? Music purchased on the store don't count towards your cap.

I recently got my invite into Google Music (beta) and have been using that over the last week or so. Storage wise it's prefers to use a number of songs, 20,000. That'd be, for me, over 130 gigs of space. So that's nice, I don't have to worry about space. But in the fine print it's noted that the service is free while it's in "beta". Now, if it's anything like GMail that could be a long time. So why's it in beta to begin with? In order to offer storage of 20,000 songs there needs to be some serious back-end work to be done which can be better handled through the invite system. It also gives Google time to keep talking with the music industry to try and get deals in place for Google to unveil a more full featured system. I'm not totally comfortable putting my whole library on Google not knowing what it will cost me once it leaves beta but, like most everything else in my digital life, Google holds all my other data and whether it's a show of trust, or stupidity, I trust Google more than I trust Amazon.

Both services offer a partner program to aid in getting your music up there. For me this is the biggest issue. Amazon has more options for uploading. From fully automatic where it finds your library (iTunes in my case) then just systematically starts uploading to manual version that lets you pick specific folders or even playlists. I found this to be really useful as I'd want my more listened to track put up first while I try the service out. One thing I wish it had was a way to throttle the speed at which it uploads stuff. While I'm on the computer doing stuff I'd rather it uploaded at a slower speed then the fastest possible.

Google's is somewhat less flexible in regards to being able to pick individual playlists to upload, but you can tell it specific folders to upload. As I watched songs that I hadn't listened to in a while upload I was getting discouraged of the service, but remembered I could specify a folder. In iTunes I picked my favorite playlist, copied the songs to a different folder then told Google to hit that folder for uploads. Once I got my favorites up I switched it back to uploading my whole iTunes library. Where Google wins, for me, is that I can tell it at what speed to upload. So during the day it's uploading at its slowest speed and at night, when I'm not on, it's going as fast as possible. This is probably one of the reasons why I've uploaded nearly double the number of songs versus Amazon. Also, and this is purely me, I like that the Google manager sits as a system preference in my Mac, as opposed to running as an application like Amazon does. I tend to not like seeing so many open applications so I notice I'm constantly closing Amazon but hardly ever turn off Google.

Once the music's up, the two act very similarly. The left side handles song management; artists, albums, genres, and playlists. Good thing for both, your playlists are uploaded also. If you use folders to group playlists those aren't carried over. The majority of the screen is your list of songs, and at the bottom are your player controls. You're able to create new playlists in both and Google offers a "Instant Mix" based on a song you pick. It's supposed to analyze the picked song and find similar songs to create a mix. It's much like the Genius mix in iTunes. You're able to edit album and song information in Google, which is helpful if it couldn't find the album art. Amazon doesn't offer such tools. What Amazon does offer is the ability to download songs, which could be a reason why the music industry wasn't so happy. Since you can log into your Amazon Cloud Drive from any computer you can also download a song to any computer. Useful if you've uploaded everything to the cloud and not using your own hard drive space to store music, but need to download music to sync up your iPod (which can't nicely access these services).

Playback quality for both services are pretty good, to my ears anyway. They both start playing pretty quick after hitting play and I didn't come across too many dead spaces where the computer was trying to cache the song. Both services offer Android apps to play on your Android devices, which isn't surprising. As I mentioned early their web interfaces are fairly similar and both run a little Flash. There is a web interface for iOS devices on Amazon, but it's not pretty. You can also access the Google one, but I've not been able to get it to play, but I'm running a now outdated iOS 3.

So which one wins for me? Google Music. Only because the uploading is less bothersome than Amazon's. This could change in about a week when Apple unveils their service which is rumored to scan your library then just reference the iTunes master library to populate your playlists. How will songs not purchased from iTunes, or ripped off CDs, or gotten from other sources be handled? This is a question that I need to get answered before I consider it. But the bigger issue is the feeling of being locked into a platform, much like the Mac/Windows wars of the 80's and early 90's when files couldn't easily be shared among the two. The real winner will be a service that will work on more than just one platform, especially for those of us who don't use Android or iOS devices.

A look at each service's most recent screens. I'm liking Google's more than Amazons. 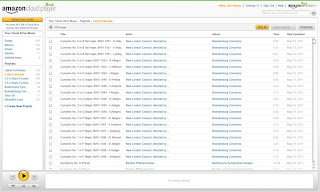 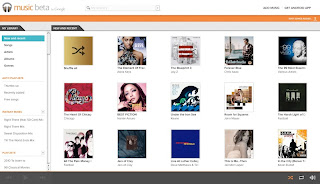