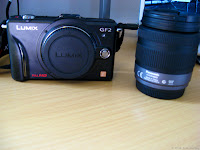 To replace my dearly departed Canon SX10is I have chosen the Panasonic GF2, a camera in the Micro Four Thirds family. The Micro Four Thirds family of cameras were the first mirror-less interchangeable lens system cameras. A conventional DSLR uses a mirror to show the picture prior to taking it, then on shutter press the mirror flips up letting the light hit the sensor thus taking the picture. With these new cameras the mirror is taken out of the equation and uses the sensor to show the picture when framing. This allows for smaller bodies and still have DSLR picture quality.

Announced in September, 2008, the Panasonic G1 was the first camera of this new generation of cameras. I liked it instantly; DSLR looking but smaller. Over the years Panasonic and Micro Four Thirds partner have released a number of body styles (range finders, DSLR-like) and lenses. One of the major draws to these types of systems are the smaller bodies and smaller lenses. With the slightly newer GF3 and Panasonic's power zoom 14-42 lens you can now have DSLR power in your pocket. This GF2 Isn't quite pocketable, and with the included zoom kit lens is almost as large as my old SX10is, but with other lenses available to choose from I can have a smaller, lighter kit.

First the improvements. The GF2 uses a physically larger sensor, meaning it will capture more of a scene and more light for a bigger and more detailed photo. The sensor also packs a little over 12 megapixels, which is over 2 megapixels more than the Canon. Though reviewers are quick to fault its noise performance, the GF2 quite easily knocks the SX10 out when it comes to noise. The kit lens is a mixed bag. The fun part of it is the fact that aperture (controls the size of the hole that lets light in) setting is actually noticeable. Adjusting aperture actually effects depth of field. This has been an endless amount of fun for me to play with; bringing subjects in the background into focus and blurring foreground elements, then reversing the process. This is made even more fun with the touch screen interface which allows me to touch focus, touch to take photos, and go through the menus. The combination of the touch screen and a number of buttons makes getting around the camera almost easier than the SX10, and given some more time to get used to it I expect it will be faster. And, to finish up the features, it records video in 1080i, a darn sight better than the embarrassing now 640x480. Physically the GF2 is smaller, at least without the kit lens, and is quite a bit lighter than the SX10. It feels almost like a toy camera, except when you look at how well made it's metal body is. Add one of the excellent pancake lenses (so named because they are flat like a...) and you get a really small setup. And those are just the immediate updates.


Sadly no camera is perfect, even if your budget isn't constrained. The first thing I found myself missing from my SX10 was the lack of an eye view finder. Thankfully Panasonic has an accessory port and eye view finder that I can put on it. That might be a soon to get accessory. Related to that, I miss the articulated screen of the SX10 that allowed for easy shots from below waist level or above eye level. Next is the lens. The SX10 spoiled me with its 20X lens that covered a whopping 28mm to 560mm! The reach of the kit lens with the GF2 is 28mm-84mm. But since I can add lenses it's not so bad and is a temporary hurdle. My other issue with the GF2 is the lack of customization I have with auto exposure bracketing, the feature I use the most for HDR shooting. The GF2 ups the SX10 in EV values (-3 to +3) but the bracketing is limited to a max range of -1.66 to +1.66 in 3 of 5 shots. I'll have to see if there's any way around this.

Overall I find I can't put the camera down for long. Part of it is the new toy effect, but the other part is it's just so much fun to take photos with.