The Dawn of the Smart Camera? 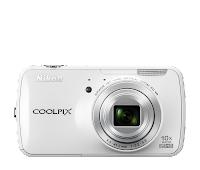 Photography circles have been all abuzz with Wednesday night's product announcement from Nikon. The Nikon Coolpix S800c (a very forgettable name) looks for all intents and purposes like a number of other point and shoot cameras with one very big difference. No, there's no big surprise in the sensor or in the lens, it's the addition of Android (specifically Android 2.3.3 Gingerbread) to the camera. This wasn't unexpected as there have been rumors of manufacturers trying to see just how to best use currently the only open sourced mobile operating system. I've been waiting for this to happen for awhile now, I just didn't know if I was going to be happy about it or not.

My vision of how an Android run camera would work is probably not the best idea. It'd be a very customized version of Android, much like Amazon's Fire or Barnes & Noble's Nook software, that would have access to a camera manufacturers app catalog. The catalog would be split into three main categories; Effects and filters applied at time of shooting, post shooting editing, and sharing. Purposely missing from these categories are games, and other fluff stuff that I don't want or need on my camera.

So I was a little surprised to see this Nikon running a vanilla version of Android Gingerbread with full access to the Google Play store. Yes, that means Angry Birds is available to play on your camera now. I was both impressed and disheartened by this. To me the best Android experience is with a stock Android installation. That way you can update far quicker (usually) than those Android devices with a skin on top of it. And access to the full Google Play store could be a way to show that the camera doesn't have to be used just for photos. Though with the number of people carrying smart phones around, and the very limited battery life of this camera, I'm not sure it'll be an everyday device for anyone. 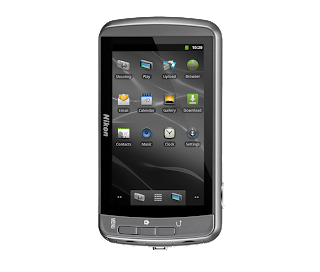 So what are the benefits to an Android/Wifi connected camera? The first one I thought of was access to Google Drive, Dropbox, or Box. Now my camera will only be limited by the battery power of it. And being connected to a Wifi network. Why not gallery sites like Picasa or Smugmug? Personally I want to pick what photos go up to those sites. That's a workflow decision. If you're someone who likes to instantly share photos on Google+, Facebook, or Twitter you can post to them much like you would on your phone. And, if you need to do any post processing before posting you can skip the computer altogether and do it on the camera with any of the many photo apps out there, then post your masterpiece.

That's all great, but there are some drawbacks to this connected smart camera. Battery life is horrible. Dpreview states the battery life of this camera/battery combo is about 140 shots. In comparison the Nikon S800 (without Android, and the same battery) managed 210 shots. Neither figure is anything to brag about, but Android takes a big cut of battery juice. And, keep in mind, these are just photos shot without wifi/GPS tagging on or web browsing. So you might have all the space you need available, but with only 140 shots to be taken you won't be filling it anytime soon. That, for me, is unacceptable and would require at least a second battery. And probably the biggest drawback is that to use all these neat apps you'll need to be connected to a wifi network. That's great if you're in a Starbucks, but not so great if you're on the beach. Of course if these kinds of cameras become popular we could see cellular data chips in them and seeing them at Spring and Verizon, with a 2 year agreement of course.

All in all I'm impressed with this first Android camera, and I think that's the important part to realize. This is just the first smart camera to come out, and with rumors of Panasonic and Sony looking into making smart cameras I think we can see more innovation, and better implementation without what I think is diluting the camera. This Nikon isn't for me, and probably isn't for a lot of hobbyist photographers, but that doesn't mean there aren't some features I'd like to see in a future camera. I think the full Android experience is just too bloated for a camera. This might be crazy but with webOS set to go open source shortly I'd love to see a camera powered by webOS.

On a kind of related note, when HP very suddenly and with little forethought (my opinion) started to shop around webOS to other potential buyers Nikon's name came up every so often. Now it's well documented that HP was asking an outrageous price for webOS so it's no surprise that Nikon turned that down and went with the open source (and free) Android operating system. Makes me wonder though, with webOS set to be open sourced by the end of the year will Nikon take a second look?
Google HP mobile palm photography webos