January 19, 2011
A couple things before I get to the photo. I recently ordered glasses online. I was really uncertain about buying glasses online, which is odd because I can't think of anything off the top of my head that I wouldn't buy online, but if you are considering it I say go for it. I used www.goggles4u.com and got a great pair that I use primarily at home as a way to take break from my contacts. I will say that I didn't feel comfortable buying the $8.99 frame and lens, so I did opt for a name brand frame, but I've been very happy with the results. For $50 I got a name brand frame and lens with a case and lens cloth. Makes me wonder why you would buy from your optician.


If you're in the market for a tablet device in 2011 I understand you think your options are Android or Apple. Might I suggest holding off and hearing what Palm/HP have coming out? Early rumors look like they have some pretty good looking tablet devices to be announced February 9. And if you are looking a phone new phones are going to be announced also. The leaks look to show a deep relationship between Palm phones and tablets, and some serious cloud storage. I've been a long time Palm fan, and have owned a a couple Palm PDAs before the whole smart phone thing came about, and I still have a first generation Palm Prē. I had been considering other options for mobile tech, but I'm getting excited for some new Palm goodies.

So today's picture from the archives. Some pictures are memorable me for how they look. Some are memorable because I was able to pull of a technique. I was in San Francisco's Japan Town for a cherry blossom festival and was initially taking pictures of the grove of cherry trees in bloom. The shots were ok, but nothing special, so I thought to go small. I found a group of blossoms and wanted to capture them with a blurred background, which is hard to do with a compact camera because of the type of sensor they have. I wish the in focus blossoms were sharper, but I was happy with the blurred out background. This is called bokeh, I believe, though there seems to be some debate over whether something out of focus alone is bokeh. Either way, I think it's a nice effect. 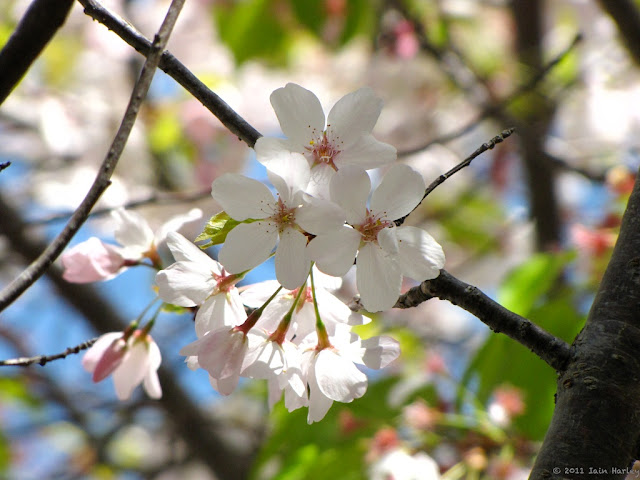