January 21, 2011
My last photo from the archive, and probably last post of the week. This shot isn't so much about how it looks but more about achieving a "look". One of the neat things about having a camera that allows you to change settings like aperture and shutter speed is you're able to do things that you just can't do when you leave the camera on Auto. I remember having read an article online about getting a light streak effect in photos, which was great because I had always wondered how to capture that. So, one night while up in San Francisco's Union Square area I found a not so busy corner, a steady wall to put the camera on, and shot. In looking at the 20 or so other shots that came before and after this one, it was interesting to see what worked (wide angle, 3-5 second shutter speed) and what didn't (zoomed, and anything longer than 6 seconds). According to the time stamps I was at that corner for 30 minutes just experimenting with different settings, and apparently, when I got frustrated taking shots of other things.


It's not pretty, but I got the streaks I wanted of cars going by. Shot with the Canon SX10is with an f.8 (to keep the amount of light down for a long exposure), ISO 80 (should have maybe kicked that up some) and a shutterspeed of 6 seconds. I corrected for white balance in Aperture, as everything had a yellow tint to it from the street lamps that I didn't like. 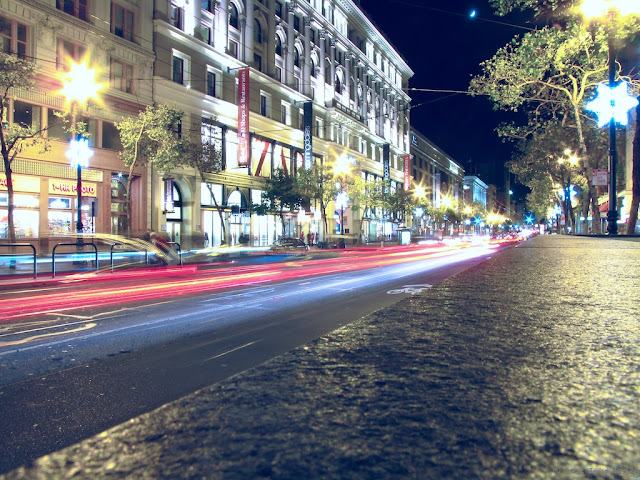